more unforgettable moments
waiting for you in 2019 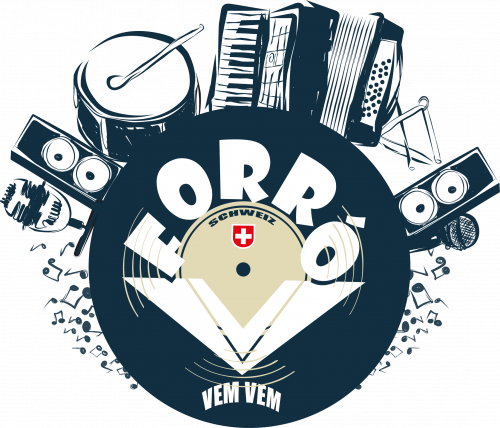 check out the video to get an idea...

the festivalzinho Forró ufem Sockel is a small event initiated by the collaboration of Forró Vem Vem, Forró Aare and the "Sockel" team of the Berne city administration in 2018.
It's 3 days of togetherness and top Forró Pé de Serra music right in the heart of the Swiss capital city.

What is Forró anyway?

Forró is derived from the Bantu word "forrobodó", which means "jumble" or "mischief" and originally designated folksy dance gatherings in the northeast of Brazil. Forró is an umbrella term for various traditional rhythms and dances of the most popular Brazilian folk music, but is also used as a name for the corresponding social dance events. Forró - both dance and music - has been influenced by European, African and indigenous cultures and includes various traditional rhythms such as Baião, Forró, Xote, Xaxado, Arrasta-pé and Coco. In traditional Forró (Forró Pé de Serra), the Zabumba (a bass drum), the Sanfona (accordion) and the triangle, the so-called "Trio Nordestino", are the dominant and often exclusively used instruments. Originally a regional style of music from the rather poor rural northeast, Forró was rather belittled in the wealthier south of Brazil for a long time, before it spread throughout the country towards the middle of the 20th century, when artists such as Luiz Gonzaga and Dominguinhos, like many other migrants from the poor northeast, moved to the south looking for a better future. As early as the 1970s, many music groups began to complement the traditional Forró trio with other instruments such as violin, guitar or double bass. As a result, a more modern Forró style, which became known in the late 1990s as "Forró Universitário", began to develop, also introducing dance steps and figures adapted from other dances such as Salsa or Rock' n' Roll. Forró is traditionally danced very closely, with a lot of physical contact - warming up the dancer's hearts and lifting up moods in no time. Our primary goal at Forró Vem Vem is to research, revive and nurture Forró Pé de Serra (Forró "roots") without neglecting its more modern branches and varieties, cherishing young talented artists just as much as the well respected "old guard", in order to keep the beautiful Forró "tree" alive, healthy and growing.
Buy now
0